Our ship departed Ain Sokhna, Egypt, on Dec. 17, sailed along the Gulf of Suez, into the Red Sea to the port of Aqaba, Jordan, where we stayed overnight.

Early the following morning some 200 of us hauled ourselves into our designated coaches for the two-hour inland trip to the ancient city of Petra.  Built by Nabateans (one of many Arab tribes) around 300 BC, Petra thrived well into late antiquity thanks to a lucrative spice trade.  The city fell into ruin after an earthquake around 500 AD.

Today, a kilometer-long walk through a narrow natural gorge leads into the breathtaking sight of a monumental tomb (100 AD) known as the treasury thanks to an old rumour about hidden gold.  Deeper into the heart of the partially excavated city you find the remnants of what was once a colonnaded street and a temple nestled protectively between giant red mountains. The mountains also served as their tombs and you can see the entrances of dozens and dozens of them as doorways cut out of the living rock.

After several hours of wandering about we headed to a buffet lunch at a big hotel, where I lost my hat, followed by the inevitable two-hour shake-and-bake on the coach back to the ship.

I declined the optional desert excursion to Wadi Rum (in old jeeps, for godssake) in favour of sleeping in then spent the afternoon shopping in Aqaba, which is where I met Tony.

His shop was no more than 300 square feet and seemed to contain millions of items covering every surface.  Jewelry at the front, old stuff at the back (some of it looked like it had been excavated that very morning) and fabric goods piled up along the perimeter of the floor. 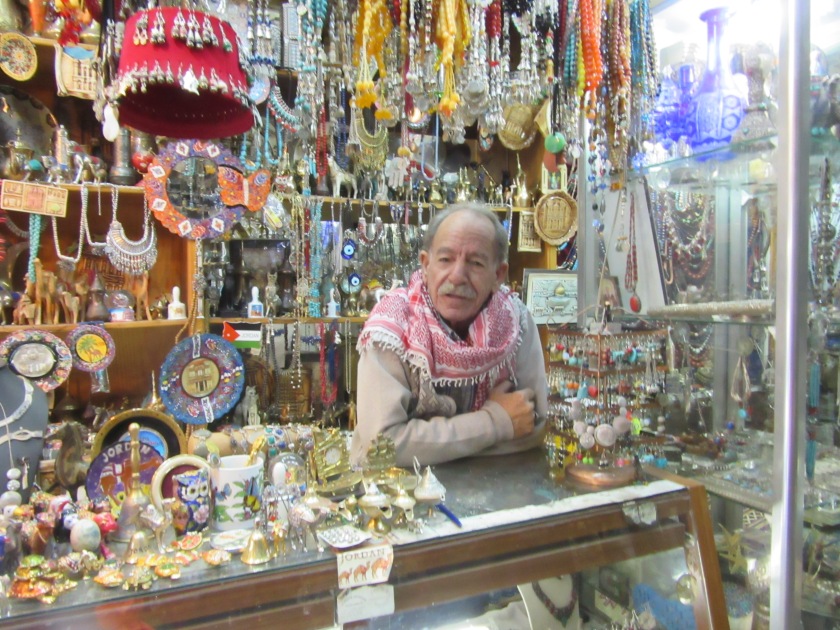 Tony followed me around telling me his life story as I tried to take everything in. He told me his family had come from Crete a couple of generations ago, and that the store had once belonged to his grandfather.

He offered me tea (I declined), told me he’d taken a liking to my face, that I was like a sister to him and as such would give me the best price if bought anything.

I ended up choosing three small items, a silver and turquoise bracelet, a brass and stone pendant and a porcelain ornament.

The bargaining began at an astronomical $100 U.S.

“What? I thought I was your sister!” I cried.

“Okay. Okay. Eighty. I make no money but I give it for eighty.”

Back and forth we went until we’d agreed to a price less than half the original asking, but maybe still too much.  As I handed over the money, he grimly announced he was taking a loss.

When I god back on board ship someone had, good news.  Someone had found my hat.

We moved on to our next port of call, Safaga, Egypt.

One thought on “Jordan”